Browser is not supported

You are using an outdated browser. For best experience, please use latest version of Edge, Chrome, Safari or Firefox browser. 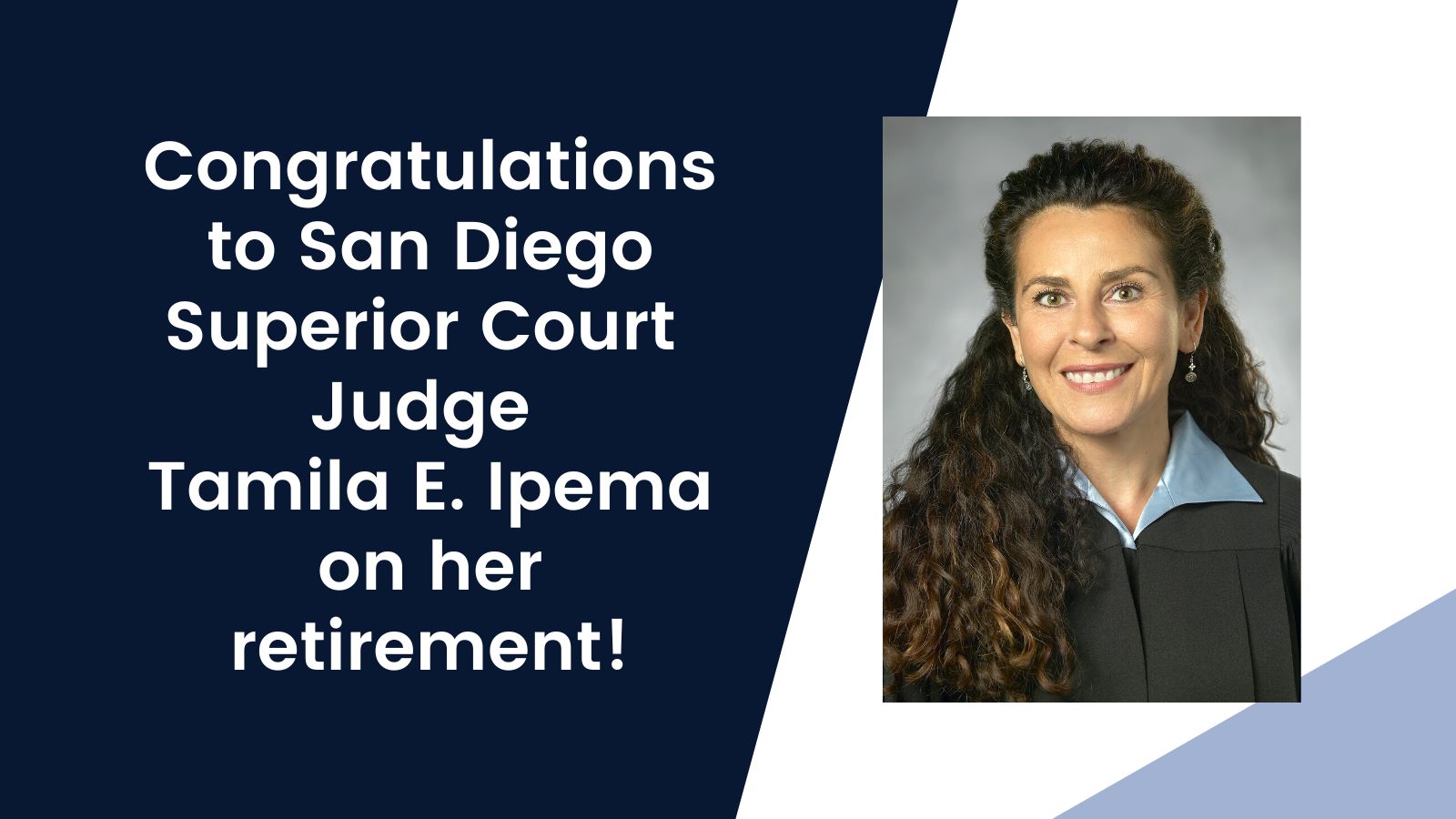 Judge Ipema came to the U.S. in 1978 after completing her bachelor’s degree from Damavand College in Tehran, Iran. She quickly mastered the English language and helped the other members of her immediate family legally immigrate to the U.S. and Canada. While working on her family’s immigration status and financially supporting her refugee family in the U.S., she received three additional university degrees including a master’s degree in Humanities with a concentration in English Literature, a juris doctorate from University of Louisville in Kentucky, and a Master of Law degree in International and Comparative Law from Georgetown University School of Law.

“I would like to thank the San Diego legal community, all my colleagues, and all my co-workers at the Los Angeles and San Diego Superior Courts who have supported me and collaborated with me to help our communities,” said Judge Ipema. “I have dedicated my entire career to public service, and I am very honored to have had the opportunity to serve the California Courts in my capacity as a Superior Court Commissioner and Judge providing equal access to justice for all. I feel privileged to have had the opportunity to give back to this great country that has given so much to me and my family.”

With a passionate commitment to justice, diversity, and inclusion, Judge Ipema brought the National Association of Women Judges’ “Color of Justice” and “Mentor Jet” programs to San Diego in 2011. She chaired these programs for the past ten years to encourage and inspire minority students ages 13 to 18 to think about careers in law and judiciary. Judge Ipema also brought the “Success Inside and Out” program to the local women’s prison in San Diego in 2016. For three years, she chaired this re-entry program designed for to-be released incarcerated women to help them get their lives back and close the revolving door to the criminal justice system.

“Judge Ipema has a great many close friends and admirers, both on the bench and in our legal community,” said Judge Michael Smyth, San Diego Superior Court Presiding Judge. “She will be missed, but we know that the pursuit of her other passions and interests will continue to benefit the community.”

Judge Ipema was a seminar leader and instructor at the B. E. Witkin Judicial College for nearly 14 years and was appointed by the Chief Justice Tani Cantil-Sakauye to serve on the Judicial Counsel’s Advisory Committee on Access and Fairness for three years. Additionally, she served on the California Judicial College Curriculum Committee and the San Diego Lawyers Club Advisory Board.

Included among the distinguished awards she has received during her career are the San Diego County Bar’s “Outstanding Jurist Award” in 2016, San Diego Lawyers Club’s “Community Service Award” in 2021, California Judge’s Association’s “Alba Witkin Humanitarian Award” in 2017, Tom Homann Bar Association’s “Friend of the Community Award” in 2016; and the National Association of Women Judges’ “Mattie Belle Davis Award” in 2013 in recognition of her furthering the organization’s mission of  Equal Access to Justice for All. In 2022, Judge Ipema was inducted into the San Diego Museum Women’s Hall of Fame as a “Trailblazer” for committing her life to the achievement of democracy, human rights, and social justice. She is slated to receive the Moxie Award from Moxie Theatre on May 15, 2022, for transforming the San Diego community and inspiring future generations through her leadership.

Notably, Judge Ipema was the President of the National Association of Women Judges (2018-2019) and she currently serves as the only U.S. judge on the Pan-American Commission of Judges on Social Justice with the mission of educating the Pan-American judges and attorneys on social justice issues, ethics, and the independence of judiciary.  This Commission was created in 2019 when she and the other six members of the commission, judges from Chile, Peru, Argentina, Colombia, and Brazil, were appointed by Pope Francis. Judge Ipema intends to continue her work with the Pan-American Commission of Judges on Social Justice after her retirement. She also intends to travel the world with her husband Judge Henry Ipema, and together, they plan to spend time as human rights volunteers helping refugees.